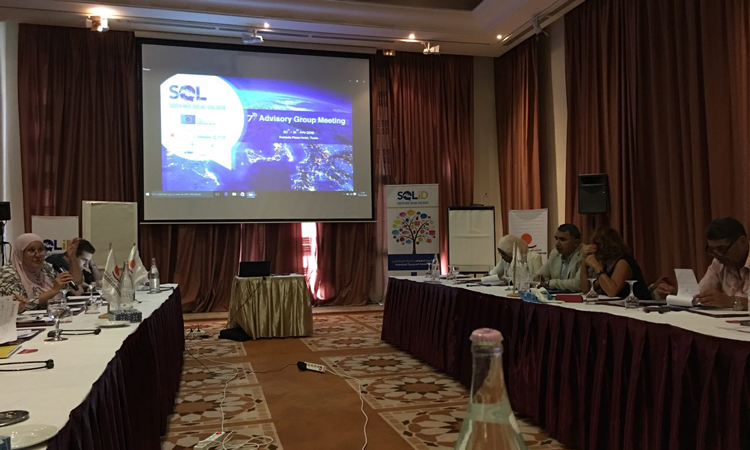 The 7th Advisory Group Meeting on the draft Charter for the Promotion of Social Dialogue among Employers”, Trade Union Organizations and Civil Society Networks in the Southern Shore of the Mediterranean” organized by ATUC, took place on July 30th -31st 2018, Tunis – Tunisia.
The meeting, inscribed within the third phase of SOLiD, brought together the project’s partners namely: Arab Trade Union Conferederation (ATUC), The Union of Mediterranean Confederations of Enterprises (BUSINESSMED), Arab NGOs Network for Development (ANND), CNT – Belgium, ISCOS, Progetto Sud, AIP Foundation and CESE – Morocco as well as the representatives of social partners in the 3 target countries: Employers’ organizations (UTICA – Tunisia, CGEM – Morocco and JCI – Jordan), Trade Unions (UGTT – Tunisia, CDT – Morocco and GFJTU – Jordan), Civil society organizations (Social Science Forum, Jordanian Women’s Union and Espace Associatif).
The event structured in sectoral and countries’ working groups was devoted to an in depth discussion of the charter’s content in view of the outcomes and comments highlighted during the last meeting in Rabat on May 12th and 13th 2018, as well as the remarks of the appointed redaction committee and legal review.
The partners agreed on the last draft version of SOLiD charter. The meeting was also an occasion to discuss the action plan on the outputs of the project and the promotion of its the charter.